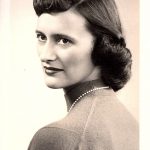 Barbara J. Gates (nee Moore), age 86, peacefully took the hand of the Lord on April 16,  2021. Barbara was born in East Liverpool, Ohio on April 29, 1934. She lived all of her early years in Weirton, West Virginia. Barbara was the oldest of two girls born to Raymond and Flossie Moore. She is survived by her husband Chuck Gates, son Jeffrey Gates (Sue Gates) of Newbury, Gary Gates of Tampa, Florida, daughter Patty Gates of Novelty, sister Nancy Tomasovich (Michael Tomasovich) of Atlanta, Georgia, granddaughter Lindsay Gates of Newbury and grandson Jack Gates of Cincinnati.

Barbara graduated from Weirton High School and Bethany College where she met her husband, Chuck. She taught elementary school in Steubenville, Ohio. She moved to Pittsburgh, Pennsylvania after their marriage and taught in the Bellevue elementary school system. Barbara moved to Cleveland in 1960 and settled in Geauga County in 1968.

Barbara took up painting and jewelry making, and this became her favorite pastime. This vocation led to Barbara starting the Artisans Corner Gallery in Newbury, Ohio. Here she came in contact with some of the finest artists in Ohio. Barbara and her husband spent vacation time in Indian River, Michigan where her parents had retired and St. Simons Island, Georgia with her sister Nancy and her husband Mike.

Barbara worked for a number of years at a gift store in Chagrin Falls and developed a strong love for the town. She had a singing part in the famous movie shot in Chagrin Falls. In her younger years she sang at numerous weddings of friends.  A memorial service was held at the Family Life Center, Chagrin Falls on April 20, 2021. Contributions in memory of Barbara may be sent to Geauga Humane Society – Rescue Village, 15463 Chillicothe Road, Novelty, OH 44072.