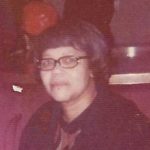 Friends received at the St. John Funeral Home, Bedford, at 11 a.m. on Saturday, January 8. The service will be livestreamed and available later viewing.

Please click on the following link to view the livestream:

MYRTIS M. HAMPTON (nee Moore) age 99, of Bedford., died on December 26, 2021. Beloved wife of the late Charles; sister of the following deceased: Ray Moore, Morris Moore, and Mazzie Moore Barlow; and aunt of a host of nieces, nephews, great nieces and great nephews. Myrtis loved to travel and dress up. She worked at Seagull Mattress Company for 20 years. After retiring she was an ambassador volunteer at Cleveland Clinic Main Campus. She was a member of the Democratic National Committee since 1994,and received her card with President Barack Obama. After Myrtis became ill she resided at Grand Oaks.   Friends received at ST. JOHN FUNERAL HOME, 923 BROADWAY AVE., BEDFORD (ONE MILE WEST OF THE FORBES-BROADWAY EXIT OF I-271), SATURDAY, JANUARY 8 AT 11 A.M.

The livestream will begin at 11 A.M. and can be viewed later using the same link.