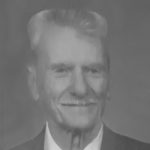 Daniel A. Saunders, 95, a proud father and husband and an avid baseball player, coach, and fan, passed on March 28, 2022, at his daughter’s home surrounded by family. Dan was born on August 17, 1926, to the late Andrew J. Sikorsky and Lillian Dlugos.  As a lifelong Cleveland sports fan, he learned early to not let the fear of striking out hold him back. He was known for his perseverance, strategic mind, hard work, and determination. As a young boy, his mother introduced him to his lifetime passion by taking him to Cleveland Indians games. Later at Benedictine High School, he played basketball before an injury cut his career short. After graduating in 1944 he attended Western Reserve University, graduating in 1950, and worked as an accountant until his retirement. He completed his military service in the Ninth Army Air Force.

His unwavering passion for sports especially baseball spanned his whole life. He traveled the U.S. with his wife playing sports. In his 60s, he topped his commitment when he played in five leagues simultaneously. Along with playing, he taught the game he loved to countless young men while serving as a mentor and helping them learn life lessons from the sport. Along with his passion for a ball game, he was a ranked chess player, was a bridge player, a devout Catholic, bowler, golfer, and sweets aficionado often skipping dinner in favor of a bag of chocolates. Dan is preceded in death by his wife of 64 years, Viola Saunders (nee Tamas). Married on July 31, 1954, Dan and Vi, both being only children, wanted a large family. He is survived by his seven children: Donald (Judy, deceased), late Danielle (Michael) Duller, Yvonne, Diane (Joe) Canzoni, Denise (Joel) Bussman, John (Kim), and Rae Birchard. Also, his twelve grandchildren, five great-grandchildren, numerous teammates, and friends. This summer, in memory of Dan, go out and enjoy a baseball game of your choice with a hotdog and beer in his honor.  Family and friends will be received at the ST. JOHN FUNERAL HOME, 923 BROADWAY, BEDFORD (ONE MILE WEST OF FORBES- BROADWAY EXIT OF I-271), on Friday, April 1, FROM 4 – 7 P.M. where prayers will be held Saturday, April 2 at 9:30 a.m., followed by Mass of Christian Burial at 10:00 A.M. at our Lady of Hope Church, Bedford.  Interment to follow at Calvary Cemetery.