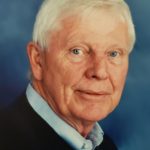 Funeral Date No services at this time.

A celebration of Ed’s life will be held at a later date. In lieu of flowers the family asks that donations be made to Hospice of the Western Reserve: https://p2p.onecause.com/hwr/donate.

On Saturday, April 2, 2022 Edward Lieberth, 77 of Bainbridge Twp., Ohio, loving husband, father of five, grandfather of seven, and great grandfather of one passed away peacefully at his home. He was preceded in death by his parents, George and Anna, and his brother Terry. He is survived by his wife Kathleen, his five children Bob (Kathy), Kathy (Julie), David (Kristin), Mitch, and Mark, his seven grandchildren, Danny (Danielle), DJ (Carey), Jessica (Zach Colatruglio), Karlie (Jeremiah Poole), Jaret, Jake, and Whitney, his great grandson, Grayson, and his three sisters, Patricia Postek, Martha Starr, and Mary Bennett.

If you wanted to know about his childhood Ed would let you know that growing up he was the six-time pinball champion, four-time marble champion, and five-time yo yo champion of Barberton, Ohio (all titles still awaiting confirmation from the City of Barberton). Sparkling Eddie (as he was nicknamed after a high school football win) grew up in the Magic City of Barberton and played high school football at Archbishop Hoban where he starred as quarterback before matriculating to Ohio University continuing to play football in college. He was a four sport star in high school: football, basketball, track, and hiding behind buildings while smoking.

A bachelor into his thirties, he gave that lifestyle up when he fell in love with the love of his life Kathleen and her three kids (Bob, Kathy, and David). He quickly adopted the kids and the Lieberth family began to grow into the four generations it is now. He was the patriarch of the Lieberth family. After getting married in August 1974, Ed and Kathleen welcomed Michele (1975) and Mark (1977). They raised their five kids in Mantua, Ohio before moving to Bainbridge Twp., Ohio in 1990. In 1999 they moved into their lake house where they got to spend their time spoiling their grandchildren with activities on Lake Taylor.

Following in his footsteps, he raised a family of slow shooting guards who found they were better basketball coaches than players. Ed loved coaching. He spent 30 years coaching volleyball, golf, basketball, football, and track and field. He was the Athletic Director at Crestwood High School from 1983-1985 until he took over the reins at Kenston High School as the Athletic Director from 1985-1997. He retired after 38 years of teaching in 2005. Phys Ed, Sex Ed, Driver’s Ed, Health Ed…he taught it all, and even if he didn’t teach it, he always knew the answer, or at least made you believe he knew the answer.

If you owned a bar named after an animal Ed was a member. In his younger years you could find him at the Moose Club in Barberton where he also served as the star pitcher for their softball team. He then became a loyal member of the Eagles Club in Chagrin Falls. He was a big fan of camaraderie, laughter, and cheap drinks, and these places provided all three for him. If you have had a drink with Ed, you have also had a laugh with Ed. These two things went hand in hand.

Ed passed away peacefully in his home surrounded by his family. It’s amazing he passed away peacefully at the age of 77 considering he had so many harrowing near death experiences in his life including: incredibly bad luck with car top carriers and ATM drive throughs, incredibly bad luck with car top carriers and freeways, and teaching all five of his kids how to drive. Two of whom almost killed him, but they will remain anonymous out of respect. His patience was his saving grace throughout his life, and his family was so thankful for that patience.

There will be a celebration of Ed’s life this summer on a date yet to be determined. In lieu of flowers the family asks that donations be made to Hospice of the Western Reserve: https://p2p.onecause.com/hwr/donate.