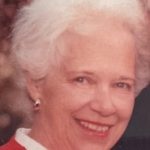 Dorothy Anne Dishong (nee Davis) died peacefully on January 21, 2022 with family at her side. Anne, as she was known, was predeceased by her loving husband of 62 years, Dix Ohlin Dishong and her brother James Davis. She is survived by her five children Sally, Amy (Tom) Groneman, Jim (Jill), John (Margaret) and Molly (Tom) Coogan.  “Grammy Sweet” will be dearly missed by her 13 grandchildren: Drew Miller; Alex, Ben and Colin Groneman; Lanie, Kailie and Joseph Dishong; Everett, Amy and Kelly Dishong; Jack, Patrick and Maddie Coogan, and great grandson, Ohlin Dishong. A native of Columbus, OH, Anne was valedictorian of her graduating class at Columbus North High School. She studied at The Ohio State University and was a proud member of Kappa Kappa Gamma sorority. After getting married, the couple moved to Toledo, Dayton, Columbus and Chagrin Falls as Dix’s career with Ohio Bell/AT&T progressed.  Anne held a number of administrative positions, including working at her father’s law firm and as secretary to the Dean of the Sociology Department at Ohio State.  It was there that Dix and Anne first met and it was truly love at first sight. Upon Dix’s retirement, they relocated to the Hilton Head, SC area for nearly 20 years before returning to Chagrin Falls to be closer to family. Anne was the rock for the children as they established themselves in new towns and schools.  An avid volunteer in the schools as the kids grew up and a life-long lover of literature, Anne was a gracious supporter of libraries wherever she lived. She loved all types of crossword puzzles, especially the hard ones, and will surely find a way to get the NY Times puzzles delivered to her in her new heavenly address. A small private ceremony for the immediate family will be held in the near future.  Arrangements were handled by the St. John Funeral Home of Bainbridge Twp. (440-708-1855). In lieu of flowers donations may be made to the Chagrin Falls Public Library, 100 East Orange St., Chagrin Falls, OH 44022.
To order memorial trees or send flowers to the family in memory of Dorothy A. Dishong (nee Davis), please visit our flower store.