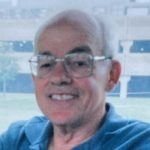 at our Bainbridge Twp. location

followed by a service beginning at 12 Noon.

JACK R. SCHMIDT, age 81, of Chagrin Falls.  Beloved husband of Gail (nee Gilchrist) for 58 years; loving father of Carl (Linda), Jack (Elaine), Melinda, and Terry Ann (Scott) Hastings; dearest grandpa Jack of J.C., Carl, Tyler Rae, Evan, Matthew and Luke; brother of Peppy Theodore and the late Carlyn Barmier. Jack, originally from Youngstown, graduate of South High School, graduated from Case with a BS in Science and Engineering in 1962. His first job was at Babcock Wilcock research center in Alliance, OH and he retired from Bailey Meter in Cleveland, where he was working as a nuclear engineer designing simulation programs for power plants, in 1976 to continue his father’s business, The Red Book, which is the National Directory of Morticians. Jack built his legacy by hiring retired business people as salesmen; often times employing friends. Family and friends have many fond memories of times with Jack.  He was always up for a good joke, with his dry humor.  He had an uncanny knack of making you feel like were one of his own, whether you liked it or not.  He is and will be missed greatly.    Friends received at the ST. JOHN FUNERAL HOME, 16381 CHILLICOTHE ROAD (RT 306), CHAGRIN FALLS, 44023 (2.5 MILES NORTH OF RT. 422), SATURDAY, SEPTEMBER 18 FROM 10 A.M. UNTIL TIME OF SERVICE AT 12 NOON. Private burial of cremains at a later date.  In lieu of flowers, the family suggests contributions to Hospice of the Western Reserve.  Reception is at The Schmidt House at 184 S. Franklin St, Chagrin Falls immediately following service, dress casual.  Come ready to celebrate Jack’s life together!
To order memorial trees or send flowers to the family in memory of Jack R. Schmidt, please visit our flower store.