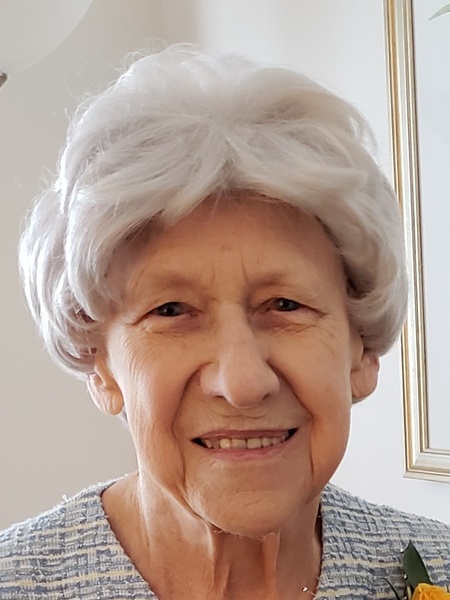 Mary (nee Horvath) Phan, age 96, left this earth surrounded by family on February 26, 2021.          Married to Edward J. Phan for 59 years until his death in 2014, Mary was a devoted mother to her four children: Mary Phan-Gruber (Michael Gruber) of Pittsburgh, PA; Margaret Phan and Martha Phan, both of Philadelphia; and Miriam Curry (and the late Marcus Curry) of Herkimer, NY. She was also a devoted grandmother to five grandchildren: Emily Phan-Gruber (Jeremy Friedman), Sean Pirnie, Joshua Phan-Gruber (Shannon Deep), Maya Phan and Marisa Phan. She also was thrilled to welcome a great-grandchild, Charlie Friedman, and is survived by loving nieces and nephews.  Mary was the youngest and last surviving sibling of Louis and Margaret Horvath of Columbus, Ohio, which included siblings Louis (Julia), Frank (Loretta), Zoltan (Ida), Gene (Margaret) and George (Helen).  She was also preceded in death by Ann (Ted) Paul, Zoltan (Marge) Phan and Elsie (Bob) Paul.  Mary worked in accounting for Pick-N-Pay/Swift Foods in Columbus and Cleveland for nearly 30 years.  In retirement, she and Ed enjoyed traveling and were active volunteers, tutoring at Rockside Elementary School, providing entertainment programs at nursing homes with a local AARP group, and serving as a Salvation Army volunteer captain, managing projects like their annual coat drive.  A faithful member of her Hungarian church, Mary was also a superb cook and hostess, welcoming many to her home for delicious food and games. She and Ed lived in Maple Heights for 59 years before moving to assisted living at Jennings Center for Older Adults in Garfield Heights, where she was a happy and active resident, hosting domino games and making friends with residents and staff alike.  Special thanks to Dr. Kohler and his team for their constant care, as well as to the staff and nurses at Jennings for their loving devotion over the past seven years, including Mary’s final week in hospice. Donations can be made in her name to: Salvation Army of Greater Cleveland, Eastern Territory, https://easternusa.salvationarmy.org/greater-cleveland/ or Jennings Center for Older Adults, 10210 Granger Road, Garfield Heights, Ohio 44125. All services private. (St. John Funeral Home of Bedford, 440-232-1155).
To order memorial trees or send flowers to the family in memory of Mary Phan (nee Horvath), please visit our flower store.