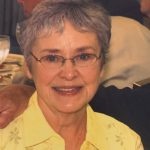 A private memorial service will be held at a later date. In lieu of flowers, donations to the Alzheimer’s Foundation of America in memory of Pat would be appreciated.  See full notice for details.

Patricia (“Pat”) Diedrich (nee Zelenka), age 85, passed away peacefully on April 14, 2021 after battling Alzheimer’s.  She was born on December 11, 1935 in Chicago, Illinois to Ella and Tony Zelenka and has been a long-time resident of South Russell and spent the last 2 years of her life at Arden Courts of Chagrin Falls.   Pat grew up in Chicago, Illinois and attended Beloit College where she was a member of the Delta Gamma sorority and met her husband, Richard.  She had a short career as a stewardess  with TWA until she started her family.  The family moved to Chagrin Falls in 1970 and she later worked at Stock Equipment Company as a secretary until she retired after 25 years.  She enjoyed spending time with her family and friends, gardening and reading books. Pat was a wonderful, loving wife, mother and grandmother who will be missed by many.  Pat is survived by her husband of 63 years, Richard; two children, Jill and Steve; three grandchildren Spencer, Nate and Jillian Diedrich; and niece Denise and nephew Rick.  She was preceded in death by her parents, brother, Robert, brother-in-law, Fred and sister-in-law, Lotte. The family would like to thank the caregivers and staff at Arden Courts of Chagrin Falls and Heartland Hospice for their kind attention and compassion.  A private memorial service will be held at a later date.  In lieu of flowers, donations to the Alzheimer’s Foundation of America in memory of Pat would be appreciated. (St. John Funeral Home of Bainbridge Twp., 440-708-1855).
To order memorial trees or send flowers to the family in memory of Patricia M. Diedrich (nee Zelenka), please visit our flower store.