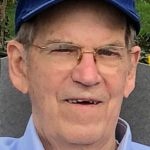 Richard Thomas Coyne was born in Bridgeport, Ohio on October 19, 1935 and died peacefully in his sleep on June 12th 2022 at age 86. He exemplified a life well lived. Richard believed in Family, Faith, Country, and doing good deeds.

Richard was married to the love of his life, Janet Marie Coyne, on August 31st, 1963 and they lived their lives together for 59 years on the east side of Cleveland. He wrote to his children in 2016, “the single most important and far reaching decision I have ever made was to ask Janet to be my wife.”

Richard is survived by his brothers, Monsignor George Coyne, and James T Coyne, and is preceded in death by his?brother Jerry Coyne. The original five Coyne families immigrated from Ireland around 1880’s, settled on the same street in Bridgeport Ohio, and worked for the railroads.

Richard will be deeply missed by his three children, Richard T Coyne Jr (Angela), Jennifer L Cooper (David), and Robert F Coyne (Ann Dooley). He was admired and cherished by his seven grandchildren: Ryan, Nathan, Brendan, Matt, Jackie, Danielle, and Audrey and two great grandchildren. Richard was the patriarch of the Coyne/Holzheimer family and will be mourned by the entire extended family. He will be remembered for his helping hand to all, and tradition of saying grace before any family gathering.

Richard served in the Armed Forces of the United States at Fort Knox in 1958. He moved to Cleveland after discharge looking for employment.

He began his career at Patterson- Leech Steel in sales. After graduating from business school at John Carroll University, he moved into management and changed from selling steel to selling plastics. Richard spent the majority of his professional career from 1968 to 2010, working as General Manager for Jaco Products Company in Middlefield, Ohio. He said of his work as a businessman, “tough decisions are sometimes required.” Do not be afraid to embrace change and the risks that go with tough decisions.” He enjoyed his work and never missed a day.

Richard served for seven years on the Foundation for Geauga Park’s Board of Directors expanding parks and creating opportunities for future generations to experience nature in Northeast Ohio.

Richard proudly served on the Middlefield Banking Company Board of Directors, retiring as Chairman of the Board after 17 years. He thought it important to teach his grandchildren the power of saving and planning for the future.

Richard was a proud volunteer for 15 years of service in SCORE (Service Corps of Retired Executives), where he mentored small business owners, and took joy in passing on his business knowledge.

Dick Coyne, as he was known to his friends, was a man of deep faith. He was a parishioner of Holy Angels Church for over 35 years, where he and Janet enjoyed their many friends and their Empty Nesters club.

Many will remember Richard for his love of a simple life; his quiet consistent way of working in the garden and creating beauty with flowers, his laughter during a game of gin rummy, and his words of wisdom like, “use the proper tool”, and ‘slow down and do it right”.

Burial at All Souls Cemetery at a later date.

In lieu of flowers, donations in the name of Richard can be made to the Sisters of Notre Dame here.

To order memorial trees or send flowers to the family in memory of Richard T Coyne Sr., please visit our flower store.