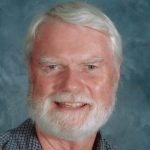 Bob was born January 18, 1941, the son of Harold and Genevieve Hamilton in Dover, Ohio.   He was a lifelong resident of Auburn Township and graduated from Kenston High School in 1959.  Bob was a lifetime member of Auburn Community Church. On June 3, 1983, Bob was united in marriage to Linda.  The couple made their home in Auburn Township and later moved to Newbury, OH.  Together, they raised three children, Shannon, Kelly and Eric.  Bob was a dedicated school bus driver for the Kenston school district over a span of 46 years.  “Mr. Bob” was loved by many who had the honor of having him as a driver.  He had a passion for old cars and tractors, most notably Studebakers, Farmall and Minneapolis-Molines.  Bob attended Ohio University where he proudly played the clarinet in the band.  He also enjoyed road trips via the backroads to find the best mom and pop restaurants.  He definitely did not mind eating dessert before the main meal. Bob enjoyed his daily “medicine” aka chocolate mini morsels.  Bob enjoyed attending his kids’ school events and later in life attending his grandkids’ events.  He always looked forward to regular outings to meet friends for coffee and conversation, playing the board game Parcheesi, and attending auctions and flea markets.    Anyone who knew Bob was touched by his kindness, humor, and mild temperament.  He was truly a peacemaker and always a source of positivity.