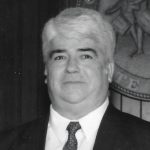 Funeral Date No services at this time.

A celebration of life may be held at a later date.

Warner Batten, of Bedford, OH, passed away peacefully on January 22, 2022, surrounded by family. Warner was born in Linn, West Virginia on September 18, 1936 to the late Foster and Pauline Batten. He lived to be 85 years old. Beloved husband of 59 years to Judy Batten (nee Wildman). Dearest father of Jamie Batten (Salli), Tim Batten (Tina) and Bryan Batten. Loving grandfather of Breann, Lily, Kelly, and Jack. Brother of Macel Carr (deceased), Lytle Batten, Eugene Batten (deceased), Fred Batten, Ronnie Batten, Marsha Skolnik, and Gary Batten. Warner was a high school teacher in Sand Fork, West Virginia, and coached both the baseball and basketball teams. In later years, he started his own plumbing and heating company. For the Bedford recreation department, Warner was the director of softball, basketball, and special events. Warner worked tirelessly for the community of Bedford serving as a councilman for at least 20 years. He also served as president of the Bedford Community Council, a director of Salvation Army, a member of the Bedford Lions Club, and coordinated the monthly food drive at Ellenwood Center. Warner helped organize and run many summer activities including the Street Dance and Oktoberfest. He was named “Bedford Citizen of the Year” and the Bedford Sun Banner’s “CitiSun of the Year.” There will be no services at this time. The family may hold a celebration of life at a later date. (St. John Funeral Home of Bedford, 440-232-1155).
To order memorial trees or send flowers to the family in memory of Warner J. Batten, please visit our flower store.