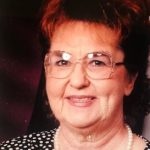 Visitation Wed., Aug. 25 from 4 – 8 p.m. at the Bedford funeral home, where services will be held Thurs., Aug. 26th at 11 a.m.. Burial to follow at Bedford Cemetery. See full notice for details.